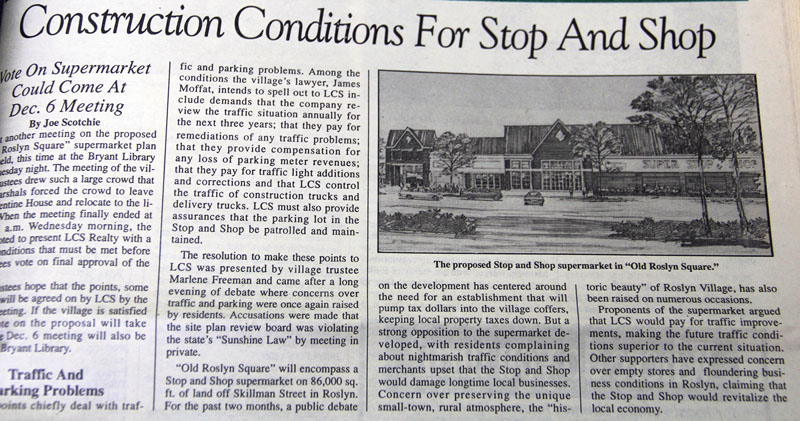 More than 20 years ago, the biggest development issue in Roslyn was the proposed construction of a Stop & Shop center. Proponents referred to downtown Roslyn as a ghost area with only a baker’s dozen of remaining shops.

Commercial development, planned for the 11 acres off of Skillman Street, would rectify the situation. It seemed so compelling that even Roger Gerry, a board of trustees member and the founder of the preservation movement in Roslyn, supported the center. But opposition arose. The Stop & Shop was scheduled to be open 24 hours a day and that proved to be a main point of contention.

The plan was defeated and a new board of trustees was voted in. As important, the new board drafted and approved a master plan for the village with an emphasis on residential development for those empty spaces in downtown Roslyn.

Years later, things have a way of coming together. Stop & Shop was quietly returned to Roslyn, opening a grocery store at Wheatley Plaza, one that just stays open until 11 p.m. Meanwhile, residential development continues apace.

About a decade ago, Atria of Roslyn Harbor, a senior residential housing complex, was opened. Gaining in popularity, Atria is the sight for many cultural events and plenty of programs for its senior-citizen residents.

Complementing Atria is the new, upscale development on the water, Roslyn Landing.

A big news story in 2015 was the announcement that The Ranches, a North Shore home builder, would, in partnership with the private equity firm G4 Capital Partners, begin taking sales offers for Roslyn Landing, a collection of luxury townhome condominiums in downtown Roslyn.

The complex is situated off Skillman Street between Old Northern Boulevard and the promenade overlooking Hempstead Harbor.

Roslyn Landing’s indoor amenities include a clubhouse, complete with a billiards table, bar, catering kitchen, dining area and space for lounging. Plus, a fully-equipped fitness center, children’s playroom and golf simulator will also be available. Mobile on-site security, outdoor land­scaping as well as snow and refuse removal will be provided for the residents, too.

The development has prices starting at $1.3 million.