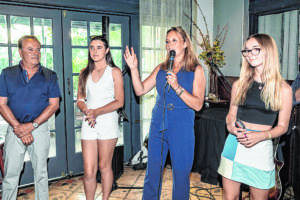 Nassau County Legislator Delia DeRiggi-Whitton welcomed more than 75 friends, family and supporters to the Metropolitan Bistro in Sea Cliff for the launch of her campaign for her fifth term as legislator for the 11th district.

DeRiggi-Whitton, of Glen Cove, has earned a reputation as a keen fiscal watchdog and ardent environmentalist whose knack for working in a bipartisan manner helps her deliver results for her constituents.

“I am completely humbled by the amount of support I have received, and I thank everyone for attending and helping with my re-election for a job I truly love,” she said.
DeRiggi-Whitton currently serves as the ranking member of the public safety and health & social services committees, and closely monitors the county contracts as a member of the rules committee. During her tenure, she has authored legislation banning the use or sale of fracking byproducts in Nassau County; cosponsored legislation to raise the age to buy tobacco and vaping products to 21, and updated county codes to prohibit the consumption of cannabis in county parks.

As the Minority Caucus representative on County Executive Curran’s COVID-19 Advisory Council, DeRiggi-Whitton continues to play a key role in scrutinizing and overseeing the distribution of hundreds of millions of dollars in pandemic-relief aid to small businesses, nonprofit entities, and other essential programs. Already, the county approved the distribution of $62.9 million in aid—a large share of which is focused on aiding small business through the Boost Nassau Resource Center. DeRiggi-Whitton worked closely with Curran to secure pop-up testing and vaccination resources for communities within the 11th District.

Consistent with her belief that infrastructure investments are key to our prosperity and quality of life, Legislator DeRiggi-Whitton looks forward to launching and completing major streetscape projects in Manorhaven, Glen Cove, and Sea Cliff in a new term.

In the community, she has been a northeastern board member of the Diabetes Research Institute Foundation and has raised nearly $1 million in the search for a cure. She is also a member of the Do Good to Feel good initiative, which delivered food and other supplies to Glen Cove residents during the pandemic. Responding to the sharp increase in need during the pandemic, Delia and her partners in the nation’s U.S.M.C. Toys for Tots drive gathered more than 100,000 contributions last December at a COVID-safe drop-off event at Nassau Veterans Memorial Coliseum.

She is married to Richard Valicenti and has three daughters and a stepson. She is the daughter of former Nassau County Judge and Glen Cove Mayor, the Hon. Donald DeRiggi, and noted local historian Dr. Mildred DeRiggi.

To learn more about her candidacy and stances on the issues, visit www.deliaderiggiwhitton.com.