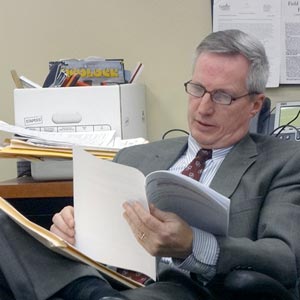 Spurred on by ongoing flagrant violations of its zoning codes combined with penalties that they cited as out of date, the Village of Roslyn Estates unanimously passed a bill at its Dec. 9 Board of Trustees meeting to allow judges far more latitude when assigning fines to transgressors of said codes.

Roslyn Estates Mayor Jeffrey Schwartzberg said that the new law would toughen up the village’s ability to respond to violators of their codes, including the provisions of Chapter 200 Zoning Laws.

“The village’s penalties are woefully out of date…there haven’t been changes in many, many years,” he said. “We need additional penalties top deter people who are continual violators of the code…and at the end of the day here, all we’re looking to do is to improve the quality of life in the village.”

Village Attorney Chris Prior outlined the research the village undertook to bring up their code violation penalties up to par with neighboring areas, as well as the specifics of how those penalties will be structured.

“We analyzed the codes in nearby villages, and pretty much down the line we were a decade or two behind the times,” he said. “We were surprised to find that he maximum find we have for a land use violation is only $250. We also found that when it comes to repeated violations by the same individual, you establish a threshold for the first offence that the judge cannot go beyond. If there’s a second offence within a set period of time the threshold is now higher, and with a third violation the threshold is higher yet again.”

Prior said that a number of different penalty provisions within the village had been amended; one of the more serious ones involves Zoning Code violations, which he said cause problems with neighbors of the violators and members of the community in general.

These fines, Prior said, establish a framework for the judge presiding in any given case to assign a fine; they can not exceed the newly-established maximums, but they don’t have to adhere to the minimum fine available, either.

These provisions also allow for the possibility of jail time, Prior said, although instances of that ever occurring are very rare.

“I’ve seen people get jail time maybe twice out of a thousand violations,” he said. “It’s never happened in this village.”

In addition, the board also unanimously passed an amendment to the village code to reflect the adjustment of the boundaries of the Birches Sanitary Sewer District; this subject was initially discussed at the board’s November meeting, with the vote held over pending further discussion.