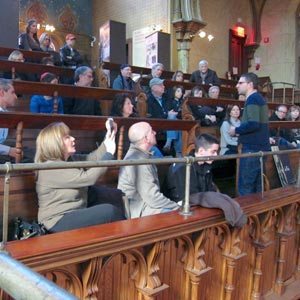 At Temple Sinai’s Rosh HaShanah services this year, President Howard Berrent launched the “Big Read,” an effort to encourage all congregants – and their friends – to read Snow in August and, then, on Thursday, Dec. 5, to welcome to Temple Sinai Pete Hamill, the author of that 1997 best-selling novel.

While the novel is set in the Brooklyn neighborhood of Hamill’s youth, the interior of the synagogue that figures prominently in the story was modeled on the Eldridge Street Synagogue in lower Manhattan where the author lived at the time he wrote the novel.

And so it was that, as part of its journey to the “Big Read” rendezvous with Pete Hamill, Temple Sinai organized a tour of both the Eldridge Street Synagogue and of the Lower East Side neighborhood in which it is located.

More than forty congregants and friends participated in the Nov. 10 visit to this legendary synagogue which, from its construction in 1887 until the mid-1920s, served as the religious, spiritual and cultural center for the thousands of eastern European Ashkenazi Jews living in the tenements, working in the shops and selling from the pushcarts in that neighborhood of immigrants. By the end of the 1920s, quotas on eastern European immigration and the growing affluence of the second generation combined to reduce significantly the size of the congregation, and the arrival of the Great Depression made upkeep and heating of the main sanctuary impossible.

The small congregation continued to use the building, but services were held in the basement. In 1987, the Eldridge Street Project, a not-for-profit corporation, began raising funds to restore the Great Sanctuary, which had been heavily damaged over the years of neglect. The restoration effort took twenty years. In 2007 the soaring Sanctuary, with its magnificent stained glass windows, was again available to the congregation, and the Museum at Eldridge Street Synagogue, which continues to raise funds and operate tours of the synagogue, opened in the basement.

Highlights of the subsequent tour of the Lower East Side included a visit to the Pickle Guys and the viewing of two landmark buildings – the Forward building where the Jewish Daily Forward was first published and the Jarmulowsky Bank at the intersection of Orchard and Canal Streets, which serviced the lower east side’s Jewish community from 1873 until 1917. Although both historic facades are protected by the City’s landmark commission, the interiors have clearly changed with the times.

The Forward building houses luxury coop apartments, while Jarmulowsky’s Bank building is being “converted” into a boutique hotel.

The Dec. 5 evening at Temple Sinai with Pete Hamill is open to all. Tickets can be obtained by calling the Temple office at 621-6800.

Temple Sinai of Roslyn is located at 425 Roslyn Rd. For more information, contact Ethel Liebeskind at 516-621-6800 or visit the website at www.mysinai.org.