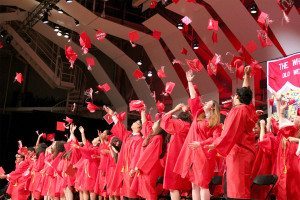 During the processional, “Pomp and Circumstance, March No. 1” was performed by the Wheatley Combined Orchestra under the direction of Stan Orlovsky.

After the performance of “The Star Spangled Banner” by vocalist Donna Nazarian, Principal Dr. Sean C. Feeney welcomed and greeted the graduating class and their friends and families. Mark Kamberg, president, board of education, and Dr. Elaine Kansas, superintendent of schools, presented an address to graduates.

Morgan Hanel, president, class of 2015, presented “Greetings from the Class of 2015,” followed by the honor essay entitled “Our Story” by Hebah Hassan. Preceding the essay, musical selection “For Good,” which was arranged by Juliana Luber, was performed.

With certificates in hand, the students exited during the recessional as “Rondeau” was performed by the Wheatley Combined Orchestra under the direction of Stan Orlovsky.

Surrounded by family and friends, students celebrated outside, while enjoying their last few hours as high school students.