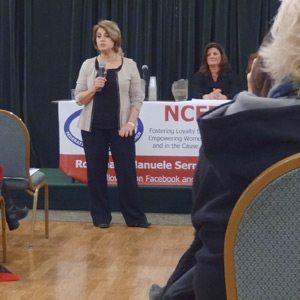 While the Common Core curriculum and the testing that is part of the program have been discussed all over Long Island in hundreds of school board meetings during the past few years, there are still many teachers, parents and students in the Roslyn area with questions and concerns about the controversial learning standards.

Greene, a former New York City public school teacher and author of Doing the Right Thing: A Teacher Speaks, started the meeting by discussing two different experiences he had as a child—a teacher who taught by the book and a teacher who targeted the interests of the children—and explained that he learned more from the latter because she was able to take the same curriculum and spin it into a positive and enjoyable experience for he and his peers. Greene explained that the Common Core initiatives take that freedom away from teachers.

“We all know that all kids are not the same,” he said. Greene also pointed out to attendees that the reviews of teachers are also tied to the exams and that many great teachers may be marked as not proficient depending on the projection of the class scores, and they can be replaced with younger, more inexperienced teachers.

In addition, he said that Common Core does not leave leeway when it comes to lessons.

“The teachers are taught pre-scripted modules, and every teacher has to do the same exact thing on the same exact day, regardless of the speed of the class,” he said. “Kids get left behind.”

Sharp, the mother of five and a long-time education activist, has one child who is still of age to take the Common Core exams—something she refused last year and will refuse again.

“I refuse to let him become a test pigeon for Pearson,” she said of the British-based testing company that has multimillion-dollar contracts with New York State.

Sharp spoke about how much the Common Core initiatives are costing districts and how money much taxpayers are paying for this unfunded mandate while the districts are dealing with severe cuts.

“They have to cut programs and re-apportion their money,” Sharp said. “Communities used to be able to choose how school districts spend their money. Now, it is coming from an entirely different direction. This is the cost of the Common Core, and this is what we are all going to be saddled with. It is going to affect all of us here on Long Island and in New York State.”

She also spoke about inBloom, the service that is hosting and managing student data, which many parents and students are concerned is being sold through back-door partnerships with private companies.

“They are giving the information to private companies that want to make bank from the students. They see your children, and all they see are dollar signs,” Sharp said.

In fact, concerns about inBloom have led an education panel appointed by Gov. Andrew Cuomo to recommend that the state sever its relationship with the company. The state Education Department has yet to act on the recommendation.