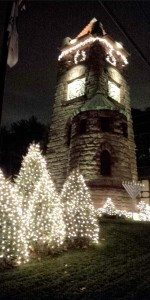 The Holiday season generally begins with the Macy’s Thanksgiving Day parade in New York City. In Roslyn, the season got off to a pleasant start last week, as several dozen people, including local officials, gathered at the Ellen E. Ward Clock Tower for the annual Christmas tree and Menorah lighting, followed by a round of caroling and good cheer throughout the downtown area.

The Roslyn Chamber of Commerce organized the evening. At 5 p.m. on Thursday, Nov. 21, people began congregating at the clock tower for the lighting ceremony. In the spirit of the season, chamber members allowed local youngsters to climb up the clock tower steps and throw on the switch that turned on the lights.

Once the lights were on, the caroling began at on the green and continued on Old Northern Boulevard, with shoppers and passerby’s being treated to all the classics of the season. The carolers stopped at Delicacies for coffee and hot chocolate courtesy of that establishment and for cookies and pastries courtesy of Diane’s Bakery.

“We continued down to the park at the end of Northern Boulevard at East Broadway,” said Lonnie Goldman, chamber president. “The lights were lit there. More carols were sung. And a splendid time was had by all.”

Among the dignitaries in attendance was County Legislator Wayne Wink, Jr., still basking in his recent election as Town of North Hempstead town clerk and Mayor John Durkin of the Village of Roslyn who is also the proprietor of Diane’s Bakery. A representative of Rep. Steve Israel’s office presented a proclamation to the mayor, Wayne Wink and Lonnie Goldman. Joining Mayor Durkin from village hall was Village Clerk Anita Frangella and other employees.

Also in attendance were representatives from the Roslyn Landmark Society, plus Chamber of Commerce members Patrick Mack, Heather Lehrman, Nicole Lemonade and Linda Robinson and Anne Woodsworth, a member of Friends of Cedarmere.

A highlight of the evening were invocations by Rev. Margo Pelham Clark of Trinity Church and Rabbi Alan Lucas of Temple Beth Sholom.

Other members of Trinity Church, including organist Martha Regelmann and several choir members were also on hand to make the night a memorable evening.