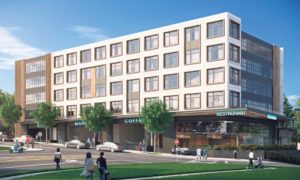 JK Equities, a private real estate company, has filed an application with the New York State Department of Environmental Conservation (DEC) for a Brownfield cleanup program at a site in Roslyn Heights.

The property is located on 281-301 Warner Ave. According to its website, JK Equities hopes to demolish the existing retail center to make way for a “new, mixed used building featuring ground floor retail, residential rental apartments and ample parking.”

The property, located directly across from the Long Island Rail Road (LIRR) station, was acquired by JK Equities in July 2018. Warner Avenue, a main thoroughfare in Roslyn Heights, is defined by state officials as a Transit Oriented Development (TOD). A Brownfield cleanup program is a prerequisite for further development. Jurisdiction of the property is maintained by the Town of North Hempstead.

The site is nearly an acre in size. In addition to the LIRR parking lot, it is adjacent to a restaurant and a child care center. A senior center, Sunrise Living, is also near the site. According to the application, the site was constructed in the immediate postwar era, “sometime between 1947 and 1951.” Since then, there has been no further expansion. The site description also noted that “various commercial tenants have occupied the individual storefront units since the building was constructed. A dry cleaner operated at the address of 289 Warner Ave. from approximately 1974 to 2010 and a laundromat operated at the address of 301 Warner Ave. as early as 1984 to present. Other noted operators of the site include Elko Textile, JME Nail Spa, Long Island Foreign Auto Parts and Laser Sharp Graphic Arts.”

These establishments all matter for the cleanup operation.

“These former operations may have used hazardous materials during their operations which could have impacted the subsurface soil, soil vapor, and/or groundwater beneath the site,” the report stated. “Based upon information identified in historic documents), the following areas of concern (AOCs) were identified: Former dry-cleaning operation at 289 Warner Ave, the land surface elevation varies across the site, with the lowest elevation at approximately 158-feet above mean sea level (amsl) and the highest elevation at approximately 168-feet (amsl). The site sits on top of the Harbor Hill Terminal Moraine, which was created from glacial deposits during the last ice age. The geology of the site is consistent with the surrounding area, comprised of sands, gravels, and cobbles. A thin fill layer, consisting of asphalt subbase was observed directly below the asphalt parking lot during the limited Phase II ESA at a maximum thickness of one foot.”

According the EDR report, which is included in the Roux Phase I ESA, the site is not located in, or adjacent to, regulated wetlands.

Attempts by The Roslyn News for a comment from JK Equities proved unsuccessful.

The property, as noted, is within the Town of North Hempstead, but the construction plans resemble those in the Village of Roslyn, not just the Atria at Roslyn senior housing development, but also the Roslyn Landings luxury housing complex. Both of those are strictly residential, as in compliance with the village Master Plan. Roslyn has also seen success at the commercial development at 55 Lumber Rd. at Hempstead Harbor. And so, it is clear that a positive building boom, both commercial and residential, continues to take place in the area.