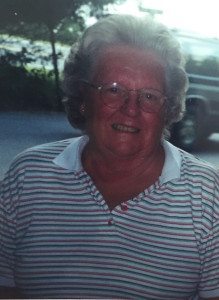 Christine Alexander, one of the few remaining links to Old Roslyn and one of the oldest members of Trinity Episcopal Church, passed away March 13 at the age of 89.

Alexander was married to William Alexander, a prominent Roslyn educator, sports coach and youth counselor, who passed away in 1982. Alexander is survived by her brother, Henry Sparhuber, daughter Terry Spraul, sons William and Robert Alexander, six grandchildren, and seven great-grandchildren.

Born Christine Francis Sparhuber in Greenpoint, Brooklyn, Alexander was the daughter of Henry and Francis Sparhuber. The family moved to a home on St. Marks Place in Roslyn Heights in 1930 and operated the Harbor Hill Restaurant from 1930 until about 1960, directly opposite the former location of the Roslyn train station. The institution was popular with commuters arriving home on the train from Manhattan, with Henry mixing cocktails and Francis serving up hearty German fare. Henry, a World War I veteran and Fordham graduate, was a pharmacist by training and had previously operated Henry’s Pharmacy on Garden Street. Both locations were razed during the Roslyn Plaza Urban Renewal Project in 1972. Alexander graduated from Roslyn High School in 1945.

During her lifetime, Alexander saw great changes in Roslyn. The year of her birth Charles Lindbergh visited the opulent Clarence MacKay estate; 30 years later, as the now-derelict estate and grounds were being bulldozed into a development, Country Estates, Mr. and Mrs. Alexander surreptitiously rescued a young dogwood tree that would live for many years in their Roslyn Heights yard on Madison Place.

An avid golfer and bowler, Alexander was one of the first women to play the newly-opened course at Christopher Morley Park, named for the writer with whom she had a brief correspondence while a high school student and aspiring writer in the 1940s.

Mr. and Mrs. Alexander purchased a cottage in 1978 in Day, NY on the Great Sacandaga Lake. Alexander had many dear friends and neighbors at her summer residence and continued to play golf there well into her seventies.

Through the decades of change there remained one constant: Trinity Episcopal Church. Alexander was an active member of the church her entire life. She was married there in 1949 and saw her own children and grandchildren baptized at Trinity. Her ashes will be interred there alongside those of her late husband. A memorial service will be held on April 30, at 11 a.m. at Trinity Church, 1579 Northern Blvd.

The family has requested that in lieu of flowers, memorial gifts be made to Trinity Church.