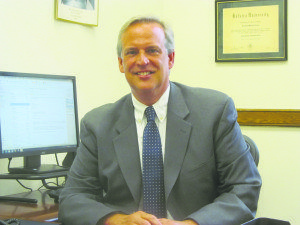 Fino Celano, the new superintendent of the Herricks School District, knew by his junior year in high school that he wanted a career in education.

“I had wonderful teachers who inspired me, were great models,” he said.

Celano said those teachers at Monsignor Scanlan High School in the Bronx combined a love of learning with the ability to connect with their students.

Now, as he takes over the helm at Herricks following the retirement of John Bierwirth last May, his objective is to work to keep Herricks students inspired. Up to 25 percent of the students in the Herricks Schools are from the Roslyn area, mostly from Roslyn Heights.

“My goal is to take a great district to build on our successes to make it even better. My philosophy is continuous improvement,” Celano said. “Herricks has always been known to be on the cutting edge of curriculum.”

Celano said he aims to keep it there. His first major move in new curriculum is the introduction of Project Lead the Way, a science, technology, engineering and mathematics program in grades K through 5 at all three elementary schools in the school district.

He said the program emphasizes a hands-on approach in earth science, biology, environmental science and engineering with the use of one iPad among four students in each Project Lead the Way class. And he said Herricks is among the first school districts in New York State to incorporate this curriculum on the elementary level.

“What we’re talking about here are some of the main components in 21st century learning, an approach that focuses on problem-solving, collaboration, using technology and developing critical thinking skills,”

He said these aspects of students’ educational development are important for success in college and in the working world, where skills such as the ability to collaborate are part of the corporate environment.

Celano’s personal development included earning a bachelor of arts in history at Marist College in 1978 and a masters in reading education from Manhattan College in 1985.

His first job out of college was teaching a variety of social studies classes at Our Lady of Lourdes High School in Poughkeepsie, NY. After three years there, he returned to Monsignor Scanlan to teach American and European studies for from 1982 to 1985.

“For me, it combined a passion, loving the study of history, and having the passion of working with young people,” Celano said.

He said his goal was to teach on Long Island because of the quality of schools there. And in 1985, he landed a teaching position at S.H. Calhoun High School in the Bellmore-Merrick School District, where he taught a wide range of courses, including American history and government and Constitutional law.

“The fulfillment I have as an administrator is to have the ability to make decisions that have an impact on a large number of students,” Celano said.

He was happy in Garden City, but, he said, “an opportunity to come to a school district like Herricks doesn’t come up often.”

Of his new position at Herricks, Celano said he’s “excited” and feels “honored and lucky to be here.”

Celano said Herricks students are high academic achievers, gaining recognition in science and history research. But he also emphasized the recognition district students earn in extracurricular activities, including music and the arts.

Jim Gounaris, Herricks School Board president, has high expectations for Celano, saying, “I find him to be thoughtful gentleman with a true interest in the success of Herricks students and staff. He wants to be accountable and wants other people to be accountable and clearly will be able to define all of our successes by his measured goals for the district.”

Celano, an avid New York Mets fan, and his wife, Ann, have lived in East Williston for the past 20 years and they have a daughter currently attending Cornell University.

Reading history continues to be passion for Celano, who said he also enjoys traveling, listening to a wide range of music, attending the theater in New York and watching films.