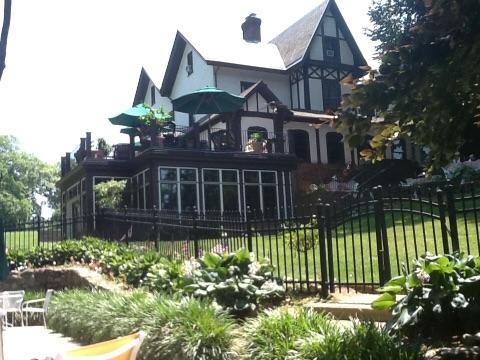 William J. Casey, the former director of the Central Intelligence Agency (CIA) during the administration of Ronald Reagan, was one of Roslyn Harbor’s most celebrated residents. During Reagan’s second term, Casey, while still serving as the agency’s director, died in 1987 at age 74. And now, his longtime estate in the village is on the market.

According to personnel with Summit Commercial Real Estate, Washington, DC, the estates is on the market via a sealed bid sale.

The 8.2-acre waterfront mansion contains three guest houses and is located across the street from the Engineers Country Club and in close proximity to The Swan Club. The Casey family moved to Glenwood Road in 1948. It is a family compound, housing generations of the Casey family.

“It’s a magical place,” said Casey’s daughter, Bernadette, who lives on the property with her husband. “We were a close-knit family. We’re the only ones left on the property. We don’t need the space as much anymore. You need a lot of people for this place. I just hope that whoever lives here enjoys it as much as we did.”

Casey was a native of Queens County who ended up living a storied 20th century life. During World War II, he was a valued member of William Donovan’s Office of Strategic Services (OSS), a precursor to the CIA that Casey would eventually run during the 1980s. Casey served in the Naval Reserves and received a Bronze Star for his wartime service.
An attorney by training, Casey was long involved in Republican Party politics, running a losing race for Long Island’s Second Congressional District in 1966. Prior to the war, Casey was a tax expert who initially came up the concept of tax shelters, all in response to New Deal-era regulatory rules. That innovation made him a figure to be reckoned with in the financial world.

From 1971-1973, Casey served as chairman of the Securities and Exchange Commission. He was also president, from 1974 to 1976, of the Export-Import Bank. In 1978, he co-founded The Manhattan Institute, a conservative think tank, whose members have consulted certain Republican Party presidential administrations.

Following the election, Casey was named CIA director. He was controversial even in death. His funeral service, for instance, put little Roslyn Harbor in the national news. The service took place at St. Mary’s Roman Catholic Church and was attended by President Reagan and First Lady Nancy Reagan. From the pulpit, the officiating priest criticized Reagan’s Central America policy of arming the rebel Nicaraguan contras, one that Casey played a key role in developing. For years, local residents talked about the day. Following the book, Veil, an often-sensationalist account of Casey’s career by Bob Woodward, Bernadette Casey, appeared on several television talk shows to defend her father’s espionage career.