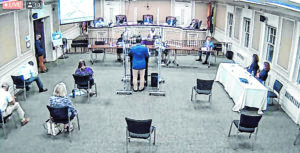 “This task force is in charge of certain responsibilities,” Town of North Hempstead Clerk Wayne Wink said. “This is the first of three sessions that we are going to hold in order to provide information to solicit, elicit and to hear information from all of you. The purpose of the task force is to conduct these listening sessions and gather public input on the issue of whether or not the town should choose to opt out or opt in with the current state law, MRTA.”

The Task Force, comprised of residents and experts in various fields such as business, health and public safety, will advise the town board of their recommendation at the end of the three sessions.

Under New York State legislation, cities, towns and villages can render their own decisions regarding recreational marijuana sales in their areas. They have until Dec. 31, 2021 to render a decision, but if they decide not to opt out, that decision is permanent.

During the Tuesday meeting, members of the Task Force listened to a number of experts who spoke about the effect the potential approval of the sale of recreational and on-site consumption of cannabis may have on the town.

Elizabeth Kase was the first panelist to speak during the listening session. Kase is a partner at Abrams Fensterman, where she is Chair of the Criminal Law Department and Co-Chair of the Cannabis Law Practice Group. Kase notably touched upon the tax revenues the town might receive if they opted-in.

“It is predicted that within approximately one to two years of those applications being granted, you will start to see those economies filling in,” Kase said. “Once those stores are open, from what we have seen from other states, cannabis industry did very well in COVID. That was deemed an essential business by most states and with that designation, the millions of dollars of revenue, even in Illinois when it had just started in January 2020 ahead of the pandemic, was an unbelievable beginning for the state’s tax dollars. It was much more than expected.”

One Manhasset resident addressed her concerns to the task force, stating the potential negative impacts allowing cannabis in the town might have on young teenagers.

“What has brought us here tonight concerns me so deeply,” she said. “I am urging everyone here to strongly consider the ramifications if we don’t choose to opt out of allowing sale of recreational marijuana in our local community. Once we invite it in—there’s no turning back. If you need to get it medicinally go for it. If you’re an adult, go for it— get it somewhere else, but not in our town and not for a tax break.”

The second panelist was Jennifer DeSena, executive director of the Manhasset Coalition Against Substance Abuse (CASA) and an attorney by trade. DeSena spoke about the importance of preventing marijuana related tragedies, especially for those who may be driving under the influence.

“Our goal is prevention,” DeSena said. “We are successful when tragedy doesn’t happen. We don’t have the tools to deal with marijuana impaired drivers. We must do everything we can to educate our community about the risks of today’s potent marijuana for the users and for others on the roads. When you’re a member of a community, particularly a leader, you make decisions that protect the greater good—not just your own wishes. When we consider opting out of retail stores and consumption sites we have to consider the greater good of all the residents.”

DeSena further stated that the town should opt-out to “protect the vulnerable and to serve the greater good.” On the topic of safe driving, DeSena noted a recent study, which stated that “almost half of teenagers who regularly use pot admit they have gotten behind the wheel while stoned. Overall twice as many teens have reported driving under the influence of marijuana than admit to drinking and driving.”

During his presentation, Schultz stressed the importance of providing safe access to cannabis. He stated that the town could implement zoning regulations, which would prevent dispensaries from operating a certain distance from a school.

“To the extent that there are concerns over safe access and children getting access, that is a huge concern of mine,” Schultz. “I think regulating the industry and having dispensaries in certain localities actually decreases the likelihood that children over the age of 21 gain access to it. They shouldn’t have any access to it.”

Schultz stated how important it is to regulate the market in order to prevent teenagers from gaining access to it.

“Last time I checked, my kids can go into a liquor store with me and be mis-educated about everything on the shelves,” Schultz said. “That cannot happen in this market, not under the MRTA. You cannot even walk in. You can’t walk in with an expired license if you’re 50 years old. They will not let you in. The rules in New York are going to be very strict. Nobody wants anyone under the age of 21—the evidence around cannabis consumption for teenagers is difficult to refute. It creates problems and we should regulate it as such. But acting like it’s not going to be in our communities is only going to serve to harm them.”

The next meeting will be held on Monday, Sept. 27 at 1 p.m. at Clinton G. Martin Park, 1601 Marcus Ave., New Hyde Park. The following meeting will be held on Tuesday, Oct. 19 at 6 p.m. at the “Yes We Can” Community Center, 141 Garden St., Westbury. Residents who wish to submit written comments can email CTF@northhempsteadny.gov.