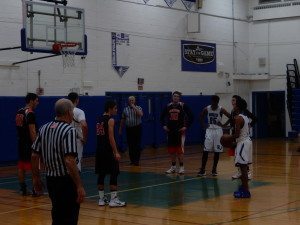 The Roslyn High School gym was packed last Friday night as the Bulldogs took on South Side High School in a showdown of the top two teams in Conference A-II play. South Side prevailed, 82 to 48, even though the game, up until the final quarter, was closer than the score suggested.

Going up against a bigger South Side squad, Roslyn battled back from a 28-7 second quarter deficit. Playing their usual full court defense and with senior guard Keandre Augustine driving the lane for shots or dishes to open teammates, Roslyn made it a close game. By halftime, Roslyn was within 12 points, trailing 35-23. In the third quarter, the Bulldogs came out strong. An Omar Burns bucket off of a missed shot closed the deficit to 35-27. A few minutes later, Jonah Tenner also scored on an offensive rebound, making the score 37-29, South Side.

However, Roslyn lost their momentum when one of the Bulldogs was called for a technical foul. South Side upped their lead to 42-29 and Roslyn never managed to get back in the game. Augustine paced Roslyn with 19 points, followed by Omar Burns with 11 points.

As the game wound down, head coach Craig Murphy decided to bench his starters and give the substitutes some playing time. Murphy also wanted to rest his starters for the Saturday away game against Division. This Bulldog team, like all of Murphy’s squads, are highly-competitive. They don’t accept losing, especially at home and especially against a top rival. However, Murphy’s strategy paid off. On Saturday, Roslyn traveled to Levittown to soundly defeat Division by a 76-36 margin.

Augustine, once again, led the Bulldogs with 17 points. Spencer Markbreiter and Jonah Tenner both bounced back from the Friday night loss, with Markbreiter scoring 10 points and Tenner pulling down nine rebounds, along with five blocked shots. With a big lead, Murphy was able to substitute freely. Eleven Bulldogs saw playing time and all of them got on the scoring boards.

Roslyn has three games left in the regular season before playoff action begins. On Tuesday, Roslyn traveled to Hewlett for an away game. This Friday, Feb. 5, the Bulldogs will travel to Wantagh for a 6:30 p.m. contest. Finally, on Monday, Feb. 8, Roslyn returns home for a 6:15 p.m. game against New Hyde Park.