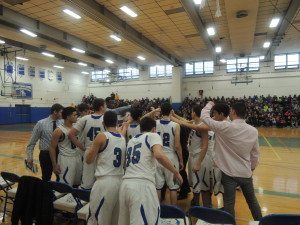 The Roslyn Bulldogs’ 2015-16 season came to an end last Saturday, but the team went down battling as hard as ever, erasing an eight-point deficit only to fall short to Sewanhaka, 65-62 in front of a screaming capacity crowd at the Roslyn High School gym.

Playing the final game of his illustrious career, Keandre Augustine led the Bulldogs with 23 points. The Seahawk defense always had a man keyed on Augustine, but the senior guard would not be denied in the playoff game as he starred on both offense and defense to keep Roslyn in the game right down to the last shot.

The Bulldogs were foiled in their bid to advance in the playoffs by the clutch shooting of Korey McLaurin, who scored 30 points, including a key, fourth-quarter three-pointer that gave the Seahawks a 63-57 lead. But with Craig Murphy substituting freely and with the Roslyn squad having the fresh legs to prosecute a full-court press, the Bulldogs closed the gap to within one point with time running out, only to fall short as potential game-tying shot fell short.

Roslyn never led in the game, but they never gave up when the talented Sewanhaka squad pulled out to seemingly comfortable leads. Three-point goals by Augustine, Jared Cohen, Omar Burns, Ben Perez and Spencer Markbreiter pulled Roslyn back in the game on several occasions. A three-pointer at the buzzer by Perez pulled Roslyn within one point of the Seahawks at halftime. Another key three-pointer by Cohen made the score 58-56 at a time when it appeared Sewanhaka had an edge. Finally, a behind-the-back assist from Augustine to Burns brought Roslyn to within four points at 63-59 at another time in the fast and furious fourth quarter when the Seahawks also seemed to have the game under control. No matter the deficit, the Bulldogs stayed in the game with their full-court press, causing numerous Seahawk turnovers. In addition, both Burns and Johan Tenner banged the offense boards hard enough to give Roslyn a number of second chances.

Burns assisted Augustine with 13 points, while Markbreiter added seven points and Cohen had six points on two three-pointers. In addition to his outside shooting, Augustine made several key steals and spent the entire game driving the lane against the larger Sewanhaka defense, earning him trips to the charity stripe.

This year’s squad, as with all of Murphy’s teams, was all heart. The season ended in disappointment, but the returning players are certain to give Roslyn fans more thrills in the season ahead.