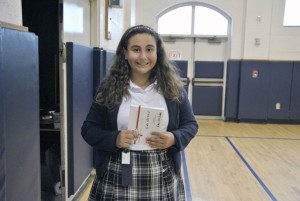 Eleni Vasiliades, a Roslyn resident and a sixth-grader at Buckley Country Day School, was awarded the Buckley Bulldog Award for Spirit for his play on the fifth and sixth-grade Red basketball team. Buckley recently handed out its winter awards, honoring the school’s top student-athletes for the basketball season. All of the athletes received ribbons for their great play and sportsmanship and three players from each of the teams were given awards.