When William Cullen Bryant died in 1878, he was able to look back on a productive life. His 1817 poem, “Thanatopsis,” made him one of the brightest lights in the emerging American literary firmament. As a newspaper editor, he had helped to build up The New York Evening Post, the predecessor to today’s New York Post to a popular publication in the rough-and-tumble world of New York journalism. As a political, his friend Abraham Lincoln had been elected and re-elected president and the bloody Civil War ended in a Union victory and the abolition of slavery.

As a poet, none of Bryant’s verse is in print today and American literature textbooks have long passed him by. But the name lives. There is, of course, the Bryant Library and the Bryant Viaduct Bridge in Roslyn, plus a refurbished Cedarmere in Roslyn Harbor, complete with a plaque for passersby. Queens County has William Cullen Bryant High School, while Manhattan has Bryant Park behind the New York Public Library. And Cooper Union, where Bryant introduced Lincoln for his famous inaugural speech in New York City still stands.

As important is Bryant’s beloved Roslyn Harbor estate, Cedarmere. Standing on a seven-acre site, this spacious house, which was built in 1787 by Richard Kirk, is now under the jurisdiction of Nassau County. The Friends of Cedarmere, a volunteer, nonprofit organization actively assists in the preservation of the gardens, the main house and outbuildings. That work has paid off as the estate is on the National Register of Historic Places and the New York State Underground Heritage Trail. While approaching Cedarmere, motorists can view a sign constructed by the county that highlights Cedarmere’s importance. 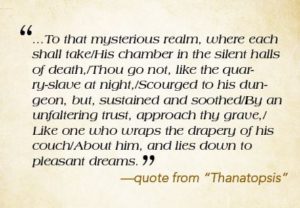 Cedarmere’s ownership passed from Kirk to William Hicks to Joseph A. Moulton and finally, in 1843, to Bryant, who gave the 40-acre property its current name. In addition to the gardens, the property has a house, pond, boathouse, mill and a landscape. Over the years, Bryant, whose fame was nationwide, added on acres and buildings to the property. The poet-editor also continued to pursue his literary interests. Residents may request an appointment to take a guided tour of the first floor of Cedarmere. To reserve a spot, call 516-544-3944, option 3.

A native of Massachusetts, Bryant initially embarked on a career in law. Frustrated by the legal profession, Bryant left Great Barrington, MA, for the brighter lights of New York City, where his literary reputation was well established. As with most writers of his day, Bryant found work in the newspaper field, working, first, for the New York Review and later, for The New York Evening Post. Bryant’s star rose rapidly at the Post, moving from assistant editor to editor-in-chief to co-owner of the afternoon paper. Meanwhile, Bryant’s own political views began to vary. The paper supported the candidacy of Andrew Jackson and with the former’s election, The Evening Post became an influential publication in the Northeast, contributing to its wealth and that of its co-owner. As the 19th century progressed, Bryant became a Free Soiler and in time, a Republican. Lincoln’s Cooper Union speech is widely credited with propelling to the GOP nomination in the 1860 election.

By then, Bryant’s own fame was secure. In 1855, he was elected an Associate Fellow of the American Academy of Arts and Sciences. In addition to poetry, Bryant also wrote short stories and edited a successful picture book, Picturesque America, which described scenic places in the United States and Canada.

In Roslyn, Bryant commuted to his offices at the Post, while also embarking on an ambitious translation of both The Iliad and The Odyssey. As civic-minded as ever, Bryant’s influence goes well beyond poetry and journalism. He promoted the idea of Central Park before it became popular and was also a driving proponent behind the creation of the Metropolitan Museum of Art. His work in science led him to become one of founders of New York Medical College.

Bryant’s verse may be out of date, but his life is a prime example of the famous Christopher Wren saying: If you want to see the man’s monuments, look about you everywhere.