On May 20, voters in the Roslyn School District, in addition to voting on the school budget, the bond referendum and a Board of Education race, will also vote on the 2014-2015 Bryant Library budget.

In keeping with austere time, the budget that the Library Board of Trustees has approved stands at $4,928,170, up slightly from the $4,895,209 in spending for the 2013-2014 budget. Projected spending increases come in the Staff and Capital Improvement portions of the budget, while spending decreases take place in the Library Materials, General Operations, Building Operations and Equipment sectors.

The trustees anticipate a smaller revenue slice, one set at $144,110, as opposed to $214,295 in last year’s budget. And so, projected taxation takes a small increase from $4,680,914 to $4,928,170. The board, last March, voted to override the 2 percent tax cap increase. However, the projected revenue increase is only slightly above that number, standing at 2.2 percent.

Deirdre Duke, president of the library board, presented the budget statement.

“As community members, the library trustees are striving to balance the excellent service you expect with the economic realities we all face,” it read. “This year we are confronted with multiple challenges: installing automated generators, rising NYS Retirement costs, the MTA Payroll Tax, and a decrease in revenues due to low interest rates.

“Nassau Library System (NLS) provides many services to the 54 public libraries in the county. One of the most valuable is the delivery service that brings books and other materials requested by patrons to or from another library. As a result of many years of cuts in state funding, each library has been asked to increase their support of NLS by contributing a larger percentage of their operating budget over the next two years. The board has taken this into account in preparing the budget.

“The board passed a resolution to override the 2 percent tax cap at its regularly scheduled board meeting on March 17,” the statement continued.

Duke listed the following cost saving measures that have been applied to reduce an increase in the amount raised from taxation:
• As staff vacancies occur each position is carefully reviewed to determine if it is necessary to hire.
• Obtaining State grants that help defray the costs of our telecommunication services and building systems.
• Partnering with the Friends of Bryant Library who support the Library with programs, such as the popular Museum Pass Program (contributions to the Friends are tax deductible).
• Partnering with local community’s non-profit institutions to lower the cost of programs and services.
• Purchasing cooperatively with the Nassau Library System. The Virtual Core Collection of databases and the Nassau Digital Doorway Consortium saves the Library a minimum of $30,000 annually.

“Your Bryant Library is used more than ever,” the statement continued. “Library patrons checked out more than 293,940 items this past year. 181,765 people visited the Library while 37,038 attended library programs. Over 22,549 patrons signed up to use a computer.

“eBooks and eReaders have become one of the most popular trends in the last decade. As a member of the Nassau Digital Doorway Consortium, Bryant is purchasing eBooks that can be downloaded to the iPad, Kindle, and the Barnes & Noble Nook. Circulation figures for eBooks and audiobooks have reached the 800,000 mark.”

The budget statement also noted the new services that the library is providing.

“Bryant patrons may now checkout a Nook Glowlight eReader pre-loaded with popular titles and current bestsellers,” Duke said. “Freegal is a new downloadable music service that gives Bryant patrons access to over 14 million music tracks, 8,000 music videos and streaming music from the Sony Music Companies. The library will be purchasing a 3D printer and computer for the public with grant money that was received from Senator Jack Martins. Look for the new DVD Express Picks display on the main floor. Bryant patrons will be able to check out a popular DVD on the spot. No reserves, no waiting. We will also cooperating with other Nassau Public libraries to develop a mobile app for your smartphones. You will be able to connect with the library: search the catalog, access your account, book a museum pass, or find out what programs are scheduled and other services.”

The library’s budget, Duke noted, is presented to the voters at the same time as that of the School District. However, she added that the Bryant Library is a separate entity with its own budget that is presented as a separate proposition.

“On behalf of the Board of Trustees, thank you for your past support,” the statement concluded. “During these challenging economic times your continued support is more important than ever. Please make your vote count on Tuesday, May 20, at Roslyn High School.”

The library budget will appear, as it does each year, as Proposition #2 on the ballot. 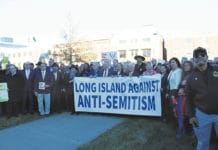