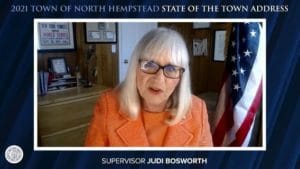 Town of North Hempstead Supervisor Judi Bosworth delivered her eighth and final state of the town address in a virtual event on Friday, March 19. Before introducing the supervisor, Amy Bass from the League of Women Voters (LWV) of Port Washington-Manhasset spoke briefly about this year’s virtual state of the town address and the stark differences from previous years due to the pandemic.

During her nearly hour-long speech, Bosworth touched on a number of important topics including the ongoing pandemic, the importance of keeping local businesses afloat, highlights of last year’s successful virtual programs, the town’s response to the countries racial unrest as well as past and future capital improvement projects throughout the town.

Bosworth first addressed the ongoing pandemic and its affects on the town, which she mentioned has been in a state of emergency since March 4, 2020.

“We in North Hempstead have been doing everything we possibly can to navigate through this public health emergency,” Bosworth said. “One of the most important responsibilities was to communicate information to the public on a consistent basis and in a way that reached as many people as possible. We produced videos, public service announcements, spoke regularly with the media, posted large signs throughout the town, distributed flyer’s and disseminated robocalls on a weekly basis [and] we continue to reach out this way.”

“One major component of our recovery road map focused on ways in which we could help our local restaurants, food service establishments and retail stores expand their operations outdoors,” Bosworth said. “Our lift-up local initiative was designed to provide a boost for outdoor dining and retail establishments. To support local business we also encouraged residents to order takeout meals and bring their food to eat at local parks. This initiative gave a new meaning to dining out allowing everyone to continue supporting local businesses while enjoying a fun and safe al fresco experience.”

“Recognizing the anxiety and hardships our residents were facing we did everything in our power as a town government to help,” Bosworth said. She listed a number of ways that the town helped residents in the midst of the pandemic, including waving fees for all town parks, speaking often with other local and state officials to ensure their residents needs were met, as well as advocating the need for additional vaccines for North Hempstead residents.

During the pandemic, the town also expanded several of their services for Project Independence members, including increased transportation to and from the grocery stores, as well as offering rides to vaccination sites throughout the area.

“To give you an idea of how significant this program was, Project Independence actually provided 21,458 rides in 2020,” Bosworth said.

Their successful Neighbors-Helping-Neighbors program offered seniors an opportunity to connect with others during a time when many felt isolated and disconnected.

“One of the silver linings of the pandemic is some of the innovative ideas like Neighbors-Helping-Neighbors will continue long after the pandemic is over,” Bosworth said. “We have remained focused on providing many of the activities our Project Independence seniors participate in despite these uncertain times.”

On the topic of racial unrest, Bosworth spoke about the town’s program called Not In Our Town, which was created 2017 and pledged that the town would not remain silent in the face of hate crimes, intolerance or violence.

“We at the town stood in solidarity with everyone throughout our Long Island community, across the country and around the world—united in the call for peace, justice and equality,” Bosworth said.

The supervisor stressed that the town continues to strive to be a place where everyone feels safe regardless of their race, ethnicity, nationality, religion or sexual orientation.

Bosworth’s speech also touched on the approval of several major capital improvement projects, which the town will be completing over the next five years and looked back on several projects that were completed in 2020.

“The town’s road infrastructure is critically important as reflected by the increased funding for roads—both asphalt and concrete and drainage improvements over the last several years based on input from each council person,” Bosworth said. “During the pandemic we were hard at work implementing many improvements including construction of an overflow parking lot adjacent to the Yes We Can Community Center, the Beacon Hill Bluff stabilization, reconstruction of the Leeds Pond Culvert, sidewalk replacement along Plandome Road above the Long Island Railroad bridge and the Mnaorhaven boat ramp and Gerry Park Pond dredging, which were funded by FEMA.”

Another notable portion of Bosworth’s speech highlighted the town’s “strong fiscal management.” The supervisor stated that the town’s fiscal stress score was 1.7, the lowest number of any town on Long Island, and also highlighted the recent rating from Moody’s Investors Service.

“This administration is the first in the town’s history to earn the prestigious triple-A bond rating from Moody’s Investors Service,” Bosworth said. “Our triple-A rating—the highest rating a municipality can obtain was reaffirmed this month for the tenth consecutive time. The stable outlook provided by Moody’s also reflects the towns conservative fiscal management practices, which will support healthy operating performance as well as a strong financial position.”

Bosworth concluded her speech by reminding residents to continue to take all safety precautions, including social distancing and wearing a mask. She thanked frontline workers for their hard work and dedication and stated that the town will be placing a monument in front of town hall to honor them.

“We are a family in North Hempstead and that has never been more apparent than now,” Bosworth said. “While this was a tough year on many levels and extraordinarily challenging, we never stopped working together on behalf of the residents of North Hempstead and we are truly optimistic about brighter days ahead. The best is yet to come.”