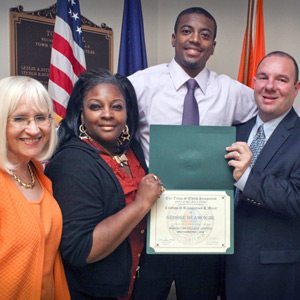 Last month, Roslyn resident George Beamon visited the Town of North Hempstead Town Hall where both Supervisor Judi Bosworth and Councilman Peter Zuckerman honored him for a successful college career both on the court and in the classroom.

Beamon, a graduate of Roslyn High School, led the Manhattan Jaspers to this past year’s NCAA Tournament while leading the team in scoring and capturing the Most Valuable Player award in the Metro Atlantic Athletic Conference tournament. During his career at Roslyn High School, he led his team to the Nassau County Championship back in 2009 while garnering All-State honors in 2008 and 2009. At Roslyn, he set numerous scoring records.

Beamon has also excelled academically, graduating last May with a degree in Business Management. He is currently pursuing his Master’s Degree in Organizational Leadership, also at Manhattan College. The leading scorer on the Jaspers this year, Beamon will be attending workouts for NBA teams this May in Atlanta prior to June’s NBA Draft.

“I am so honored to have such a successful student athlete living here in the Town of North Hempstead,” said Zuckerman. “I wish George the best in his goal of reaching the NBA. We already know that he is someone we can all be proud of.”

Beamon was joined by his mother Deborah and his two cousins, Devon and Samuel. When asked what his plans are for the future, Beamon said, “I just want to support my mom and my family. They have done so much for me and I just want to give back to them.”

— Submitted by the Town of North Hempstead