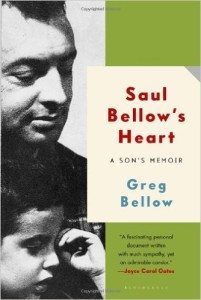 Last week, The Roslyn News told the story of Gabriela Mistral, the Nobel Prize-winning poet who lived in Roslyn Harbor during the 1950s. This week, we examine the Roslyn connection for another Nobel Prize laureate, the American novelist Saul Bellow (1915-2005). This year is Bellow’s centennial, an occasion that has seen a new biography, an essay collection, a memoir by his oldest son and an essay collection on the state of the American mind co-edited by his second eldest son. Bellow was a native of Chicago who lived in the New York City area off and on during the 1940s and ‘50s. Chicago was the setting of many of Bellow’s most famous work, including The Adventures of Augie March (1953). Still, New York City figures prominently in his fiction, in such books as The Victim (1948), Seize The Day (1956), Herzog (1964), Humboldt’s Gift (1975), A Theft (1989) and most significantly, Mr. Sammler’s Planet (1970).

Bellow did not live in Nassau County, but he does have a connection to the area. His second wife, Sondra lived in Great Neck where she raised the couple’s son, Adam, currently vice president and executive editor at Collins Books, an imprint of HarperCollins Publisher. For years, Roslyn was home to Ruth Miller, who like Bellow was a native of Chicago. Miller and Bellow were friends for several decades and in 1991, Miller published a book, Saul Bellow: A Biography Of The Imagination (New York: St. Martin’s Press). During her own time in New York, Miller taught at Brooklyn College, The New School of Social Research and later, at the State University of Stony Brook. After the publication of the Bellow biography, Miller relocated to Jerusalem, where she taught at Hebrew University.

Miller’s book is a mixture of biography and criticism. She first met Bellow in 1938, where the young instructor advised her to attend the University of Chicago, an institution that Bellow briefly matriculated at and decades later, became a faculty member at the Committee on Social Thought. The two maintained a friendship throughout the years, even though Bellow’s relationship with the New York literati could, at times, be testy. Their conversations did end up in Bellow’s fiction. As Miller recalls in the book, she once told Bellow about her father who, while on the way to the funeral of Miller’s father-in-law in Chicago, accidentally ended up in the wrong parlor of the funeral home. At the end of Seize The Day, the novella about a failed salesman, Tommy Wilhelm, the main character believes that he sees a business confidant, a Dr. Adler, by a funeral parlor on New York’s Upper West Side, where the novel’s action takes place. Wilhelm, who has just lost his last life’s savings in an investment with that same man, follows him into the parlor. The man turns out not to be Adler, but a stranger. Wilhelm finds himself at the wake of a stranger where his troubles comes to a conclusion: “…the heavy sea-like music came up to his ears. It poured into him where he had hidden himself in the center of a crowd by the great happy oblivion of tears. He heard it and sank deeper than sorrow, through sobs and cries toward the consummation of his heart’s ultimate need.”

Miller’s biography didn’t turn out as originally planned. In the introduction, she related that Bellow “ultimately decided” not to let Miller quote from his archived letters that Miller had read while doing research. Still, A Biography Of The Mind is a valuable book of criticism, noting the contrasts between an optimistic world view and a gloomy one that pervades Bellow’s fiction, plus those many reflections on “appearance and reality,…the aspiring soul and the querulous body, between the power of wisdom and the power of experience, and…the dream that by representing life in all its various quests for significance, [Bellow’s heroes] can in some way assist mankind.”

Like most artists who travel to New York from the hinterlands, most of Bellow’s time in the New York area was spent in the city, even though he lived briefly in Forest Hills during the 1950s. In 1994, Bellow gave a well-publicized lecture at Adelphi University, where he talked about life in Chicago during the Depression years. The books alluded to earlier in this article include The Life of Saul Bellow: To Fame and Fortune, 1915-1964 by Zachary Leader (New York: Jonathan Cape), There Is Simply Too Much To Think About: Collected Nonfiction, edited by Benjamin Taylor (New York: Viking Press), Saul Bellow’s Heart by Greg Bellow (New York: Bloomsbury, USA) and The State Of The American Mind, edited by Adam Bellow and Mark Bauerlein (West Conshohoken, PA: Templeton Press). The latter book is a follow-up to the 1987 best seller, The Closing Of The American Mind by Allan Bloom and with it, yet another Bellow connection. Bloom and Bellow were colleagues at the University of Chicago and Bellow, according to published reports, encouraged Bloom to write such a book, one that became The Closing Of The American Mind, which included an introduction by Bellow.

Miller’s biography, published nearly a quarter of a century ago, makes its own contribution to the scholarship of American literature as did her other books, which include The Poetry of Emily Dickinson and Blackamerica Literature: 1760 to Present.