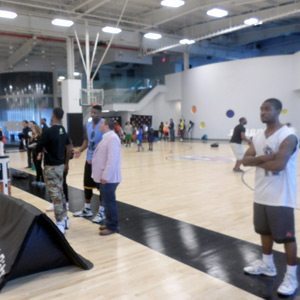 Last Sunday, Bass, who is managing partner of RBA Sports, hosted the fifth annual RBA Sports Showcase at that location.
The event drew dozens of professional basketball prospects and scouts from nine NBA teams, including the New York Knicks and the Brooklyn Nets. At the same time, the courts were full of youngsters playing in organized games from the grade school to high school age levels.

“The turnout was great,” Bass said of the Sunday event. “From the standpoint of the scouts, the level of talent just gets better and better each year.”

During the showcase, teams play a series of abbreviated games for the scouts. Before the contests, Bass gave a pep talk to the players, reminding them that this is their big chance to hit their shots and impress the scouts. The action, as one might guess, was fast and furious.

The showcase has become one of the preeminent professional basketball combines in the country, featuring numerous up and coming stars from the New York City area. Bass has used to showcase talent that often flies below the radar NBA prospects.

Following the inaugural RBA Showcase in 2010, RBA’s Vernon Goodridge, a forward from LaSalle University, was signed by the Golden State Warriors. After the 2012 RBA Showcase, Phil Jones, a forward from UNC Charlotte, was signed by the Minnesota Timberwolves. Last year, after the showcase, 12 RBA players were drafted into the NBA Development League.