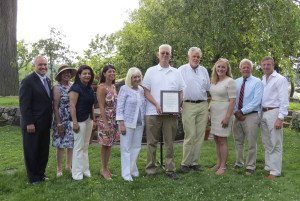 The committee, formed originally by former Assemblyman Tom Di Napoli and former Sea Cliff Mayor Ted Blackburn, was the first inter-municipal organization to focus on improving water quality. Now there are protection committees for nearly every embayment on Long Island. The harbor has gone from being called a “dead zone” to the reopening of clam beds through the hard work of the committee, its member municipalities and the Coalition to Save Hempstead Harbor. DeRiggi-Whitton has helped to secure funds for a number of important projects to protect and improve the harbor, including the restoration of Scudders Pond, the North Hempstead Shoreline Trail, the Sewering Feasibility study and the Sea Cliff Avenue sewering project.