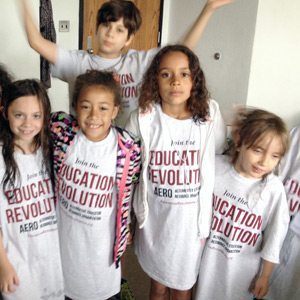 The Roslyn area is known nationwide as having one of the top school districts in the country.

There are other organizations in the village that also promote educational excellence.

This year the Roslyn Heights-based Alternative Education Resource Organization (AERO) will celebrate its 25th anniversary with a major conference to be held at LIU/Post in Brookville from Thursday, June 26 through Sunday, 29.

Jerry Mintz, founder of AERO, grew up in the community, went to Willets Road School and graduated from the Wheatley School.

In a recent talk Mintz recalled that he was first introduced to the learner-centered approach to education when as a child, his grandfather would sit down with him and ask him “What do you want to learn about?”

Later, while at Wheatley, he continued the process by organizing his friends into a club that discussed anything they were interested in, even getting their own guest speakers.

Only a few years later he started his first democratic alternative school. That school is still going 50 years later.
In 1989, Mintz followed up that success when he started AERO. Its mission is to make learner-centered education possible for people everywhere.

AERO, Mintz said, now has members all over the world. They have hundreds of thousands of unique visitors to their website every year. They help parents, teachers and students find learner-centered schools and programs. They help parents start the home schooling process.

In all, AERO, Mintz added, has helped start more that 75 educational alternatives, including Brooklyn Free School, Manhattan Free School and Pono, in Manhattan, and Queens Paidaia. There is an alternative program at the Wheatley School called SWS, founded in 1971. There is also a private alternative in Roslyn.

At the conference to be held at LIU/Post in Brookville, people have already registered from 37 states and provinces and seven countries. The conference, Mintz said, will include 60 workshops and six keynote speakers will be presented.

Keynoters include Zoe Readhead, current head of Summerhill School in England and daughter of founder A.S. Neill; Lenore Skenazy, author of Free Range Kids and called “America’s worst Mom;” Ramchandra, founder of a self-sustaining ashram/orphanage in Nepal; Ron Miller, the foremost proponent of Holistic Education; Justo Mendez Aramburu, founder and director of five incredible schools for at-risk children in Puerto Rico, plus a presentation by Brooklyn Free School’s staff and students, and a summary of AERO’s 25 years by Mintz.

The conference is open to the public. Students are especially welcome to attend. As entertainment, a local home schooler will do a standup routine as a warm up for Lenore Skenazy’s talk.

For more information, go to info@EducationRevolution.org.