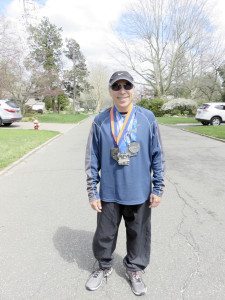 That’s how Albertson resident Jeremy “Jerry” ArbitalJacoby describes his annual running of the Long Island Marathon. This year’s endurance contest, which takes place on Sunday, May 3, starting near the Nassau Veterans Memorial Coliseum, will mark a milestone in ArbitalJacoby’s career. It will be his 10th consecutive full marathon. Not a bad showing for someone who took up running three decades ago, only as a way to stay in shape.

ArbitalJacoby, a native of Roslyn Heights, began running in the mid-1980s. He recalled a moment when his clothes were becoming tight. And so, he took up exercise. At first, ArbitalJacoby began inline skating, before moving on to running. It wasn’t easy at first. ArbitalJacoby recalled running up a hill in the Roslyn area and becoming winded, but really enjoyed being outside and exercising. Though many years have passed, he can now make it up that hill easily.

The Wheatley grad learned that consistency helped him become a successful runner and he kept it up over the years. Then one day, he heard a running coach speaking
on a radio program. The coach claimed that anyone could run a marathon with consistent training.

Prior to that experience, ArbitalJacoby only ran for health reasons. His normal routine consisted of running two to three miles, a good stretch, but not anywhere near what a marathon (26.2 miles) entails. For one workout, ArbitalJacoby ran with a new pair of sneakers. Apparently, the brand did wonders for his endurance. ArbitalJacoby recalled running eight miles during that workout. That day inspired him to try running in the Long Island Marathon.

The first time he tried, more than a decade ago, ArbitalJacoby only trained for the half, but kept on going and made it all the way to the 19-mile mark. Running in Eisenhower Park, ArbitalJacoby recalled how after the runners reached the halfway mark, they were greeted by a race official who jokingly told them: “This way for the sane; this way for the insane.” In his first marathon, ArbitalJacoby decided to join the “insane” and try to finish out the race. It didn’t happen. After 19 miles, he thought to himself, “put a fork in me, I’m done.” But the experience made him realize what it took to complete a full marathon and adjusted his training accordingly. The next year, he did make the entire race and has done so nine more times since then, as he is set for his 10th consecutive finishing race this Sunday.

ArbitalJacoby said that he runs four or five times a week, in four-to-eight mile stretches, along various routes in the Roslyn area. On Sundays, he does what he calls a “long run” of 12 to 20 miles, depending on where he is in his training cycle. All of his workouts, he added, are designed to get him through another marathon.

When asked what marathon had been the most memorable, ArbitalJacoby couldn’t single out any particular race.

“They’re all memorable,” he said. “I never thought it would be [such a blast]. The races are a lot of fun.”

ArbitalJacoby estimates that out of the 9,000 or 10,000 runners who participate in the races that weekend, only around 10 percent choose to run the full marathon. He is determined to remain one of those runners. The race is long—it takes ArbitalJacoby nearly five hours to complete the course, but every marathon is worth it.

“The volunteers are amazing,” he said. “They are always handing out water and cheering you on.”

ArbitalJacoby also had kind words for the Nassau County officials who put on the marathon each year.

“I am so appreciative of what Nassau County does,” he added. “I do it [running] as a way to fulfill an amazing exercise goal throughout the winter.”

All that culminates in what has been an annual achievement in endurance and dedication by one of Albertson’s most dedicated marathon athletes, who encourages others to give it a try.