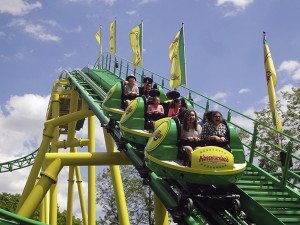 After all the research, planning, construction, and hardship, the dream has finally become a reality: Turbulence, Adventureland Amusement Park’s latest and greatest roller coaster, finally made it’s much-ballyhooed public debut before throngs of ravenous crowds just itching to try it out for the very first time.

Turbulence, a yellow-and-green behemoth replacing the park’s previous flagship roller coaster­—The Hurricane, demolished after gracing Adventureland for 22 years—is a 55-foot high, 1,210-foot long, 45 mile-per-hour thrill-ride that had the crowds lined up as far as the eye could see.

Adventureland co-owner Steven Gentile spoke to the gathered crowd at the base of Turbulence shortly before the ribbon-cutting ceremony that officially unleashed his new ride upon the masses.

“Two-and-a-half years later, and we are finally here…Turbulence is done and ready to go,” he said. “We did this not only for our Adventureland family, but more importantly, we’ve done something that we feel is very special for the people of Long Island.”

Gentile noted that Turbulence possesses one astonishingly unique hook that is sure to make each and every ride for its passengers a different awe-inspiring experience each and every time they strap themselves in for a go, while remaining more accessible to all ages than its long-standing predecessor.

“What makes the ride so unique is that each car, of which there are three on each train, spins independently of each other while the ride is in motion, based on how is in each car and how much they weigh,” he said. “Turbulence is a friendlier ride than The Hurricane was. The Hurricane had a 48-inch height requirement, but Turbulence only has a 44-inch height requirement, which comes out to a two-year age difference.”

Both the public and local dignitaries showed up to for the grand opening of Turbulence; Town of Babylon Councilman Tom Donnelly was among those on-hand, and presented a citation of achievement to the Adventureland family to mark the occasion while praising them for their civic-mindedness throughout the years.

“I wanted to come by and wish the folks at Adventureland lots of luck with the new ride,” he said. “I can’t thank the folks at Adventureland enough for all their community involvement, with Autism, Juvenile Diabetes, and many other community programs that they participate in. They’re not just a good business, but they’re a great neighbor to all of us.”

Legislator Rose Walker (R-Hicksville) showed up to the event with well wishes on behalf of Nassau County Executive Ed Managno, and pointed out that the very first to ride Turbulence that day were doing so thanks to winning a charitable lottery.

“It’s wonderful to know that they had a raffle contest that they used as a donation to an Autism group. It’s just great,” she said. “It’s an exciting day here in Farmingdale, and an exciting day for Adventureland.”

The Grand Opening festivities kicked off at 2 p.m., with the lucky first participants finally getting to give it a whirl.

Ed Tomaselli, 15, of Holbrook, was one of the lucky winners who got to ride Turbulence before anyone else that day, and afterwards, he eagerly recounted the experience of the one-of-a-kind roller coaster.

“Once you go up and come down the first drop, you start spinning and you get to see other people’s faces and their reactions and I just thought it was crazy cool,” he said. “I was in the very first car, and before I knew it was facing backwards, forwards, spinning all around. It was awesome, it was fun, and it was mind-blowing.”

Amanda Schnapp, 15, of Dix Hills, was almost speechless after climbing out of Turbulence; clearly, the ride had made a lasting impression upon her.

“It was amazing,” she said. “It was incredibly smooth, and it’s was just so exciting. There are no words for how awesome this ride is.”

Jana Schlackman, 14, of Farmingdale, admitted that while she wasn’t normally a fan of roller coasters—normally she’s a wee bit skittish for such things, she said— Turbulence seemed to find the perfect balance between intensity and fun that most other rides miss.

“It was so crazy. I can barely even talk right now,” she said. “What makes it different from other roller coasters is the spinning, which is so cool. I can’t wait to ride it again.”

Several members of the park’s young staff members took the ride for a spin. Christina Merrill of Levittown said, it was a one-of-a-kind experience.

“It was awesome. I usually don’t like rides, but that was a lot of fun,” she said. “It’s a really smooth ride, and I usually get dizzy easily, but I didn’t get dizzy at all.”

“It was amazing…the constant spinning makes it a different ride each and every time,” he said. “It’s a very unique, very smooth ride. It’s just an amazingly good ride. I would totally go on it again and again.”

Adventureland is located at 2245 NY-110 in Farmingdale. For details, visit www.adventureland.us.