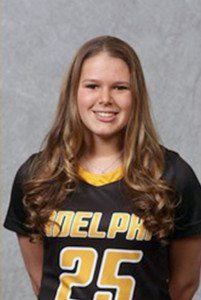 Allison Schneider, one of the stars of last year’s top-rated Roslyn High School girls basketball team, is continuing her athletic career as a lacrosse player for Adelphi University’s women’s lacrosse team. As of press time, the Lady Panthers are 9-0 and ranked number one in the nation.

Schneider has seen limited playing time, but she contributed to Adelphi’s 20-4 win over Franklin Pierce by scoring her first goal. For the year, Schneider also has three assists, as she is making her contribution to Adelphi’s winning season. At Roslyn High School, Schneider had a stellar career in both basketball and lacrosse. She played varsity basketball all four years and was team captain in her senior year. In 2013-14, Schneider received the Coaches Award and was named to the All-Conference A-II team. In lacrosse, the sport that Schneider chose to continue in her college career, she also played varsity for all four years at Roslyn. She also received the Coaches Award and was team captain in both her junior and senior years. Among her lacrosse awards are being named Nassau County’s Unsung Hero in 2011, All-Conference in 2012, Honorable Mention All-County in 2013 and All-County in 2014.

Back at Roslyn High School, the spring season, weather permitting, is underway. The girls’ lacrosse is continuing its winning legacy with wins over Floral Park, 11-8 and a convincing 8-2 triumph over Carey High School. In the Floral Park win, a goal by Callie Migden forced the game into overtime. The Lady Bulldogs scored two goals in the first overtime and one in the second to take the 11-8 win. Molli Spender and Reilly Liotta had three goals each to pace Roslyn. Migden was the star of the Carey win also, scoring three goals. The Liotta sisters, Reilly and Mackenzie also had big games. Reilly had two goals and Mackenzie had nine saves in the goalkeeper’s box. Molli Spencer also had two goals and Samantha Busch had a goal and an assist.

Last week, the boys’ team notched their first win with a 10-8 win over Uniondale. The balanced scoring attack was led by Jordan Steinfast, who had four goals and two assists. Jordan Hurwitz had one goal and three assists, while Brett Hollander and Zach Simon had two goals each. Hunter Rebetti also had a goal and Michael Rapone came through with an assist.

Finally, attention to all parents of Roslyn High School athletes: The Roslyn News is committed to putting out the best sports page it can each week. That can be improved immensely by contributions by the parents themselves: Providing scores, details of top performances by their children and photos of both the teams in action and of individual players. Email jscotchie@antonmediagroup.com or call 516-747-8282. Any help is greatly appreciated.