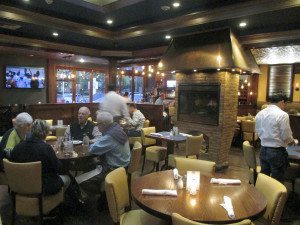 What’s your idea of American food? In New England it’s lobster roll. When I was in South Carolina shrimp and grits were ubiquitous. Here on Long Island is it duck breast (even though we now have only one duck farm left)? A burger? Hot dogs? Buffalo wings?

You can find all that and more at the new restaurant in Mineola, TRUE American Kitchen.

TRUE is quickly becoming my favorite new restaurant. Starting with the complementary crispy house-made potato chips, I’ve worked my way through most of the menu and am looking forward to trying everything that comes out of the kitchen.

I asked Tracy Gibstein, who with Joe DeLorenzo, chef/owner of Abeetza and Abeetza Next Door in Greenvale, is the co-owner of TRUE, how they decided what to include on the menu. She said they brainstormed on the great classic comfort foods.

From her catering background, Gibstein recalled how everyone always made a bee-line to the pigs-in-the-blankets, so hot dogs had to be on the menu. The TRUE hot dog, called The Half Pound Waygu Beef Chicago Hot Dog, is the polar opposite of the tiny cocktail frankfurter. It is served on an oversized roll with chopped onion, jalapeno, green relish, yellow mustard and three-cabbage slaw. It’s big and only the bold can pick it up and eat it hot dog style. All the sandwiches are served with house fries.

Since DeLorenzo is fond of lobster, the New England lobster roll is on the menu. The lobster roll is a buttered and grilled potato roll filled with large chunks of lobster and not much else—no celery or other fillers here, just lots of lobster and a bit of dressing to hold it together. They had to have turkey and it appears here as a turkey burger with slow roasted tomato jam, avocado, spicy mayo on an oversized English muffin.
It must have been fun sitting around thinking of all the foods that make up American cuisine. Mexico and Asia are brought together in the Amerasian Braised Duck Taco served on a soft corn tortilla with pickled cabbage and spicy mayo.

Chicken lovers can choose roasted chicken with fingerling potatoes or southern fried chicken served on a cheddar cheese and bacon waffle. I tried the grilled 12 ounce prime New York strip steak and it was perfectly tender, tasting like it had just come off the home grill. And you can’t have an American restaurant without mac-n-cheese. TRUE’s is four cheese with roasted jalapeno and slab bacon.

The big hit dessert is the large warm chocolate chip cookie, served in a skillet and topped with ice cream and fresh whipped cream. We also loved the apple pie ala mode in a jar.

What great American food isn’t on the menu? Pizza. If you want that you’ll have to go to Abeetza in Greenvale. TRUE American Kitchen is at 348 E. Jericho Tpke. in Mineola. The phone number is 516-747-5100.