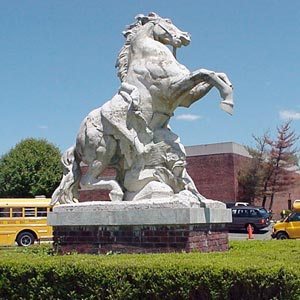 One of the biggest events of the past year was the restoration of one of the Horse Tamer statue from the old Mackay mansion and its successful transfer to Gerry Park in downtown Roslyn.

The unveiling, which took place last October was an occasion for civic pride as hundreds of residents, plus local dignitaries and relatives of the Mackay family all turned out for the big event.

But there is also the matter of the other horse tamer. For nearly 60 years it stood on the entranceway to Roslyn High School, a proud symbol of that institution and the village itself.

Several years ago, wear and tear took its toll on the statue. According to Roslyn School District officials, its condition became dramatically worse over the winter of 2010-11. Large pieces of stone began to come loose and fall to the ground. As an emergency measure, straps were installed to prevent a total collapse. The district had the statue moved to North Shore Architectural Stone in Glen Head, which in time completed the restoration of the statue now standing in Gerry Park. The high school’s statue will remain in storage and safely out of the elements until sufficient funds are raised to begin the restoration.

For the past two years, Roslyn High School alumni have become involved in giving that statue the same restoration treatment to the one that now greets passerby’s on Roslyn Road. Those alumni have formed an organization, Friends of the Horse Tamer, whose goal is to raise $100,000 to completely restore the statue and return it to its original place at the high school. Friends of the Horse Tamer is a grassroots organization partnering with Roslyn Schools to restore this unique symbol.

“Our ultimate goal is to return the Horse Tamer to its pride of place on the Roslyn High School campus,” said Barbara Silverman Berke, president of Friends of the Horse Tamer. “It was a great thrill to be on hand to watch the unveiling of the statue in the park. It made everyone realize what spectacular works of art these statues are, and we can’t wait to see the school’s Horse Tamer brought back to its original condition, as well.”

With the Holiday Season in full gear, the Friends are asking the Roslyn community to consider a tax-deductible gift to their organization as in both keeping in the spirit of the season and moving the statue closer to its former home.

Furthermore, donations can be used to honor a student, teacher, community member or school club with the purchase of a personalized brick to be laid in a walkway around the restored statue. New York Met fans, for instance, might note this is similar to what happened when CitiField opened and longtime fans were allowed to purchase their own personalized brick at the entrance of that ballpark.

Recently, Friends of the Horse Tamer received a boost when the Nassau County Legislature pledged $25,000 to the fund.

“We are currently at $63,500 and our goal for the restoration is $100,000,” Berke added.
Donations can be made online or mail service, either at www.FriendsOfTheHorseTamer.com or with checks payable to Roslyn Public Schools, PO Box 322, Roslyn, NY 11576.