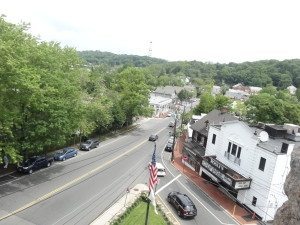 Last Saturday, the Village of Roslyn opened its doors. The Roslyn Landmark Society’s 2015 House Tour was the first event of its kind in over a decade.

Many local homes and attractions were open to the public. Those include the Trinity Episcopal Church, the Warren Wilkey House, the Van Nostrand-Starkins House, and the iconic Ellen E. Ward Memorial Clock Tower.

An estimated 100 people came to the self-guided tour to learn about Roslyn’s centuries-old history.

“The house tour’s purpose is to bring awareness to the community of the work of the Landmark Society and of the Village of Roslyn and its efforts to preserve our history and our culture,” Anne Tinder, executive director of the Roslyn Landmark Society, said. “I hope people get an idea of the importance of preservation and maintaining the essence of the village.”

“The young people of today are always involved with their iPhones and their iPads and getting something secondhand. To actually come in and see the buildings and see the way people lived in those days, these tours are very important,” added Mina Bobek, one of many volunteer docents.

Always a focus of the tour is the Van-Nostrand Starkins House. Located on Main Street, the home was constructed around 1680, making it the oldest home on the tour. It is also the only house built in Nassau County in the 17th century that is still in its original location.

“It goes back to the 1600s, it was an early Dutch and early English settlement at the time,” Tinder said of the home. “People don’t really know how old Roslyn is.”

Also on Main Street is another favorite attraction, the Warren S. Wilkey House, which was built in 1864. At the time, Wilkey was in the leather business and made a big profit selling leather to the Union Army during the Civil War.

“People have liked the Warren Wilkey House and the belvedere on the top and taking pictures from up there and the view,” Tinder said.

However, the consensus favorite landmark was the Clock Tower. Built in 1895 in memory of Ellen E. Ward, the Clock Tower is now celebrating its 120th anniversary. People had the opportunity to climb to the top of the tower and hear the bell ring and get a rarely seen view of Roslyn.

The Clock Tower is seldom open to the public, but the doors opened for this special anniversary.

“People have talked about the Clock Tower, they’ve enjoyed that tremendously,” Tinder said. “It had been restored and it’s in good working order.”

“I’ve passed it my whole life and I’ve always wanted to go inside,” Samantha Reichenbach, 25, said of the Clock Tower.

Don Konrad, 58, of Bay Shore said he specifically came on the tour to see the Clock Tower.

With the success of the event, the Landmark Society is hoping to make the house tour an annual event.

“We hope it is [an annual event] and we hope to expand it,” Tinder said. “I hope that with today being a success that some of the people around the park who weren’t comfortable with opening their homes may in the future feel that they can open up their homes and participate.”

For more information on the Roslyn Landmark Society, visit roslynlandmarks.org.