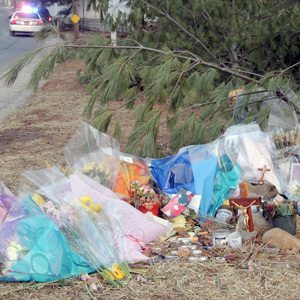 For years, the intersection on Roslyn Road and Locust Lane has been a major concern of local residents who have witnessed several accidents in the area, including one that landed an SUV in the driveway of a homeowner’s property.
But the worst-case scenario occurred last Wednesday, March 5 when two Mineola teenagers perished in an accident at that same location.

According to detectives, a 19-year-old male victim was driving northbound on Roslyn Road near Locust Lane, when he lost control of his 2004 Volkswagen Jetta. The vehicle struck the curb and then a tree in the rear yard of an Oak Lane residence.

The driver Steven Clancy and his passenger Javier Gonzalez, both from Mineola were pronounced deceased at 1:23 a.m. and 1:28 a.m. respectively by Nassau County Police Department AMT O’Keefe.

Ironically, the accident took place only several hours after Nassau County Legislator Judy Jacobs (D – Woodbury) and North Hempstead Town Clerk Wayne Wink, a resident of Roslyn, had met with town officials and Nassau County engineers to find a way to ease the situation at that troubled intersection. Jacobs now represents the Roslyn area in the county legislature. Roslyn Road is under county jurisdiction, while the town oversees Locust Lane, which is located in Roslyn Heights.

Both Jacobs and county officials, have, according to published reports, made proposals to improve driving conditions. That includes installing a traffic light at Roslyn Road and Locust Lane, guardrails for residential properties, creating a right-turn lane, removing the veer-off lane, improving signage, updating pavement markers and the permanent installation of a sign that flashes the drivers’ speed as they travel along Roslyn Road.